Bulldogs and Bulldog puppies are the fourth most popular dogs in the USA and the UK. Their popularity in America began in 1903 when Dr. Horatio Nelson and his Bulldog companion Bud embarked on America’s first-ever road trip.

Adorned with matching sunglasses, Dr. Nelson and his Bulldog ventured forth on their daring journey. Roads and cars were still new at that time, and with only 150 miles of paved roads, no gas stations on the way, and no maps to guide them, a long journey seemed impossible.

Yet, despite making several wrong turns on their way, Dr. Nelson and Bud made history as their trip opened up the future of long travels and transportation.

Bulldogs are also famous in England. During World War II, England was often portrayed as a strong and tough Bulldog, so much so that Winston Churchill, the British Prime Minister, was referred to as the “British Bulldog.”

These friendly yet serious-looking dogs have a long history and many interesting characteristics. We are going to discuss all the information and Bulldog characteristics in detail. Keep reading to know the secret behind their wrinkly faces and unique body features.

This article will explain all you need to know about welcoming a Bulldog puppy in your home.

Bulldogs are famous worldwide for their wrinkly face and pushed-in nose, giving them a distinctive appearance. With their short and stout muscular bodies and doleful eyes, the Bulldog puppies are the most adorable creatures on earth! 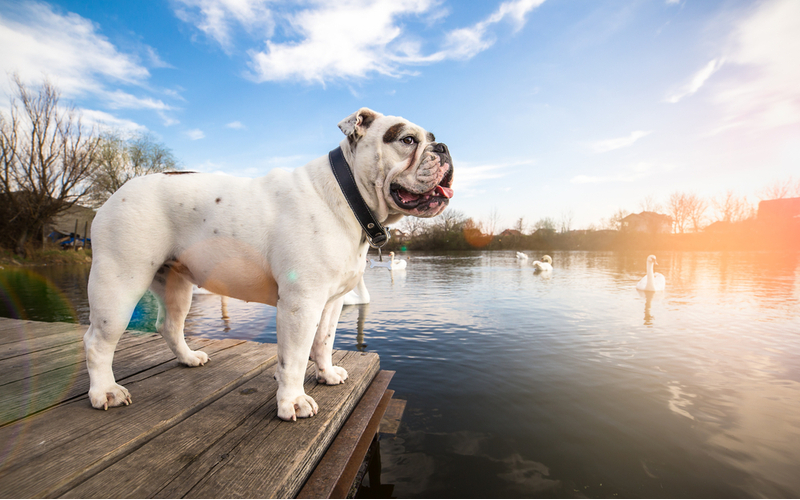 However, the huggable puppies that we love today have a long and brutal history.

Bulldogs (pronounced as BUHL-dawg) were bred for a vicious sport named bullbaiting, the medieval sport in which dogs were used to harass bulls. Thankfully this barbaric sport is a thing of the past, and Bulldogs have been domesticated.

Valiant yet kind, the Bulldogs are low-slung, thick-set, well-muscled dogs famous for their tenacity and courage. These loyal and docile pups adapt and adjust easily everywhere.

With some distinguishing features like small ears, a furrowed brow, loose skin on head and face, small pushed-in nose, hanging chops, undershot jaw, and unique rolling gait, Bulldogs can be recognized from a mile away.

Let’s discuss the Bulldog characteristics as well as their history in detail.

Historically Bulldogs can be traced back to the 13th century in England during King John’s reign. Back in the day, they were bred to fight a staked bull for the entertainment of spectators. These ancestors of modern Bulldogs, apparently impervious to pain, were brave and ferocious.

They had a firm and stout build (providing the low center of gravity) to hold their ground against the bulls who tried to launch them in the air. The ability to stay grounded along with a strong underbite made it easier for them to hold onto anything they were biting.

Their small back legs helped them avoid injuries even if they were shaken hard. Their short snouts enabled them to breathe properly while holding onto their opponent’s snout. Even the wrinkles on their face served the purpose of keeping blood from getting in their eyes.

They were bred with all the features to help them in the fight. Things took a turn in 1853 when bullbaiting and other blood sports that involved animals were banned in England.

After the ban, this blood sport went underground and took the form of pit-dog fights. This criminal sport required more animated and quicker dogs than Bulldogs. So, Bulldogs weren’t needed anymore and faced extinction.

However, some people who genuinely adored Bulldog puppies started breeding them to have a kinder and more attractive demeanor. They bred friendly and mellow pets through selective breeding who loved children and families.

Although, it wasn’t until 1886 that this breed was finally recognized by AKC, all thanks to the Bulldog fanciers who worked hard to keep them from getting extinct. Some of these Bulldogs were transported to the United States and Germany to work as herding dogs.

However, they were honored later on as they were chosen the mascots of various sports teams, including Yale football and the University of Georgia.

Bulldogs have a round, wrinkled face with a wide body and short limbs. They are beefy little fellows with signature loose skin on their face with a nose rope. They have broad shoulders, and their body sits low to the ground. 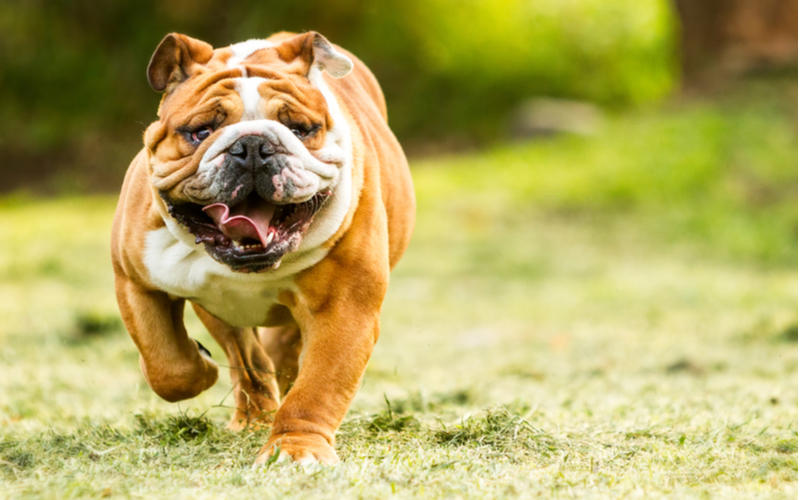 Moreover, Bulldogs have a big muzzle with a short pug that has a deep yet broad stop. They have deep-set dark eyes and have small thin ears slightly high on the head. Their tail is either screwed or straight.

Bulldog puppies are pretty similar to adult Bulldogs, though they are undoubtedly cuter!

They weigh around 40 (females)-50 (males) pounds, which puts them in the category of mid-sized dogs. They are no more than 14-15 inches taller in general.

Even though Bulldogs might make you feel intimidated by their looks, they are gentle fellows. They adapt well with families and like to go on walks as well as snuggle with you on the couch.

The antithesis to their fierce past, Bulldogs, are cuddle mongers! They like to get as much attention and affection as possible.

Although Bulldogs don’t like to be bothered, they happily put up with all the tugging and yanking that comes with kids. They do not show anger if bothered; they simply walk away.

These courageous, determined, and self-sufficient dogs are way more independent than any dog breed. This enables them to solve problems independently without asking for help from their owners, unlike many other dog breeds.

However, this also means that they can be hard to train as they are not interested in mastering all the skills. However, food is the best motivator for them, and you can manage to make them follow basic obedience orders.

There are four types of Bulldogs, which are listed below.

The English Bulldog is the oldest member of the Bulldog breed. They have small ears and a low grounded body.

The American Bulldogs are athletic and working variations of the original Bulldog. They have a leaner body and long limbs, characteristics that help them hunt and guard.

This is the least common type of Bulldog, and it is a cross between an American Bulldog, Pitbull Terrier, Bullmastiffs, and English Bulldog.

Bulldog puppies are bred in multiple variations. There is a lot of variety in Bulldog colors. The signature glossy flat and short coat comes in almost ten different colors that include:

The average life expectancy for Bulldogs is 8 years which is a little shorter as compared to other dog breeds.

No, Bulldogs are not hypoallergenic. Contrary to their appearance, they produce allergen triggers.

What Can I Expect When Caring for A Bulldog?

Get ready to deal with snoring, farting, and snorting if you are thinking about welcoming a Bulldog puppy into your house.

The Bulldog breed is not a barker and prefers a slow-paced life relaxing in your lap or lounging on the sofa. However, this brachycephalic breed can face several health problems, and you need to take good care of these chubby canines.

Because of their build, Bulldogs are prone to many health problems. We will list them all here so you will know what to watch out for.

However, do not let this list of possible diseases scare you away from adopting a Bulldog. Most of these can easily be prevented if you take good care of your pup.

Try to look for an ethical and licensed breeder when buying a Bulldog, especially a good American Bulldog breeder, as it would eliminate many joints related problems, and you will get a healthy dog.

Moreover, you might find English or French Bulldogs on sale often but make sure they are sold by a reputable breeder who follows ethical breeding practices. So, it’s best to visit the kennel to verify its authenticity.

You would also need insurance to cover all the medical bills of your canine companion and vaccinate them on time to avoid unfortunate health problems. Bulldog puppies should be vaccinated for DHPP at 6 to 8 weeks, and then after every 6 weeks until they are 2 years of age.

In addition, you need Rabies vaccination for the pups and make sure they get DHPP once every year after maturity.

The skin folds on a Bulldog can become a den for harmful bacteria and allergens if you do not clean them regularly. Often moisture and food get stuck, causing infection and irritation.

Therefore, you should clean these little tubby dogs frequently. However, since they have a short flat coat brushing them for ten minutes twice or thrice a week is sufficient. 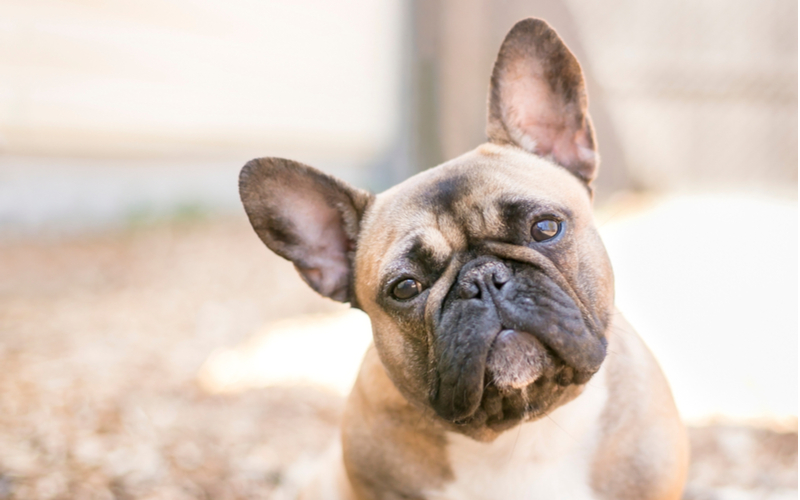 You can use peroxide and cotton to clean them and cornstarch to help dry them fast.

As for their nails, you would need to trim their nails every two weeks. You also need to brush their teeth daily to avoid gum problems.

These mellow dogs like to live slow-paced life. They would be happy to sit next to you all day long on a couch, but they won’t mind going on walks sometimes or an occasional ramp.

However, they get tired easily, so it is essential to provide the opportunity for moderate exercise. Keep the walks short and steer them clear of too much warmth as it can interfere with their breathing.

Plus, Bulldogs have short legs that hinder them from whirling across the water, so be careful around pools. Do not allow them in more than elbow-deep water, and do not leave them unsupervised.

Bulldogs need good-quality food, whether it is homemade or commercially prepared. You should consult your vet before starting any diet for your Bulldog.

Some of the dogs are susceptible to getting fat, so you should look out for the activity level and food consumption as well as the weight of your Bulldog. But, as they are hard to train and the only thing that can tame is food, you might be inclined to use it to your advantage as much as you can but DO NOT do that. The treats should make up only ten percent of their daily diet.

Make sure fresh and clean water is available for your Bulldog all the time. Moreover, Bulldog puppies need at least 20% protein to help them grow into strong adults. Therefore, consider the age and physical condition of the dog while feeding them.

Bulldogs are easy-going, devoted, sweet, and often like to please their owners. However, like all other breeds, it is vital to help them socialize early. It is better to take puppy training classes that will enable you to deal with undesirable behaviors.

These mischievous beings love to chew stuff and like tug of war. However, you must start training them to leave what is in their mouth on command since puppyhood. You should also train them to share food from their bowl to stop them from getting protective of their food.

Despite having a gloomy mug and sad eyes, Bulldogs and Bulldog puppies are considered the most affable and social dog breeds. As per AKC standard description, a Bulldog puppy is generally kind, equable, courageous with a dignified and pacific demeanor.

They are very social and kind, making them an excellent choice for a canine house pet. So, if you would like a dog that doesn’t require too much physical activity and is a great cuddle buddy, then a Bulldog is going to be your perfect partner.

If you have more questions or topics you would like us to address, leave a comment below, and we would be happy to answer all your queries.

How To Discipline German Shepherd Puppies Without Punishment?