The statue of Balto, the Siberian Husky, in New York City, is a testament to the Husky’s popularity in America. In fact, Husky puppies are the 12 most sought-after pups in the USA.

The serum run of Leonhard Seppala in 1925 across 658 Alaskan miles on a sled pulled by Siberian Huskies to deliver life-saving serum to an area hit by a diphtheria epidemic solidified the position of Huskies as heroes in America.

A century later, the Siberian Husky remains one of the most popular dogs in America and the world.

About The Siberian Husky

Although the breed itself has been around a long time and was originally developed by the Chukchi people of the Chukchi Peninsula in eastern Siberia, whose hunter-gatherer culture relied on the strength of the Husky, they were bought to Alaska in 1908 to serve as working sled dogs.

While the aboriginal tribes and sledding enthusiasts across North America still keep Siberian Huskies for sled dog racing across the frozen Alaskan wilderness, most people keep them for their loving company.

The word ”Husky” comes from the word ”Eskimo”, which refers to the aboriginal arctic people. A Husky is any sled dog that originated in the polar regions. A distinctive feature of these dashing dogs includes their fast-pulling style.

Breeds of the Husky dog include:

The Siberian Husky is one of the most beautiful dog breeds in the world. It is a medium-sized dog that is identifiable by its almond-shaped eyes, pointy ears, and beautiful thick double-fur coat.

The Husky dog has piercing blue eyes or sparkling brown eyes. Interestingly, some Huskies can have ‘bi-colored eyes, i.e., eyes of different color due to a condition called Heterochromia.

Although the most popular Sibes are white and grey, this dog breed comes in many colors. The beautiful thick coat of the Siberian Husky can be jet black, pure white, white and grey, white and copper, white and red, and other combinations of these colors.

Perhaps the most notable feature of this dog breed is the appearance of a mask on their face. The area around their eyes and head is a different color than the rest of their face so that it looks like they are wearing a superhero mask. It certainly adds to their appeal.

The famous Siberian Swirl tail completes the Husky Dog’s unique appearance. Heavily furred and curled up high, this tail will help you recognize a Husky anywhere.

Husky puppies are as cute, if not cuter, than their adult versions. With their pointy ears and thick fur, they almost look like adorable stuffed toys. 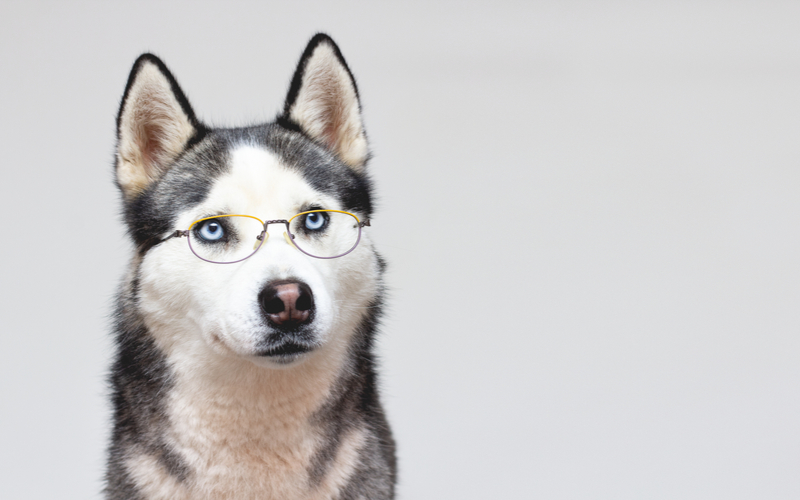 A fully grown Siberian Husky Dog is 20 – 24 Inches tall and weighs up to 60 pounds. The females are smaller than their male counterparts by an inch or two; they also weigh less.

Husky puppies weigh only a few ounces at birth. However, at 1 month of age, they weigh around 3 – 5 pounds. Husky puppies become adults when they are 9 – 11 months old or when they have their sexual awakening, whichever comes first.

The Husky dog has a gentle yet sporty temperament, and it loves adventure. However, they do possess strong prey instincts. So, we don’t recommend keeping them as pets in a house with cats and other small mammals.

Siberian Huskies usually aren’t frequent barkers. You can expect them to bark upon seeing strangers or hearing loud noises, but generally, they are a quiet breed.

Since Siberians love to explore, they might always be looking to get away and climb fences which is why we recommend always microchipping your Husky and putting an ID tag on their collar at all times!

Husky puppies are no less energetic than a fully grown Husky. They love to explore and run around; therefore, you must provide healthy outlets for their energy.

Siberian Huskies are friendly, affectionate, and strong-willed canines. However, they are not one-person dogs. They are pack animals that need to be around people and other dogs.

They may not bark frequently, but they are talkative. In fact, you will often find them trying to communicate with you through howling, growling, and whimpering. They may also occasionally whine if they feel like they are not getting enough attention.

Despite their fierce look, Huskies don’t make good guard dogs as they have a friendly temperament even with strangers.

Siberian Huskies, since highly energic, also don’t enjoy being alone for extended periods. If left to their own accord for long periods, they may become destructive. Moreover, leaving them alone in the backyard is not recommended as they are prone to escape due to their curious nature and wanderlust ability. So, secured fencing is a necessity!

Although a Siberian Husky does not require ample space, it does require adequate playtime and physical activity. And if you need a companion to take along to those boring morning walks, a Siberian Husky will gladly accompany you!

Moreover, since Huskies are long-time nomads, they adapt to situations quite easily. So, moving to a new house or having to share its space with another pup will not be a task for your four-legged BFF.

According to the renowned researcher Stanley Coren, Siberian Huskies are “average intelligent dogs” and ranked as the 45th smartest dog out of 74  dog breeds for obedience and working intelligence. However, Huskies are a different type of intelligence.

Huskies aren’t exactly obedient and easy to train. They won’t listen to your commands on the first try. But what does make this glorious breed intelligent is its ability to be independent and somewhat bossy. Huskies can take care of themselves and know how to find their way around things.

This independence, however, is also what makes Huskies a stubborn breed. Since Huskies were originally used as sled dogs to pull sleds over great distances, they’re self-reliant. They won’t obey your commands not because they’re not smart enough, but because they want to make decisions and decide if doing what you want them to do is worth their time!

Another common hobby of a Husky that contributes to their intelligence includes digging. They dig for shelter, to hide things, or even to catch prey, which makes them dangerous around other pets like cats.

Huskies also tend to be attentive and alert to their surroundings. So, even if they are prone to run away by climbing fences and gates, they will almost always find their way back home, even if the home is miles away! 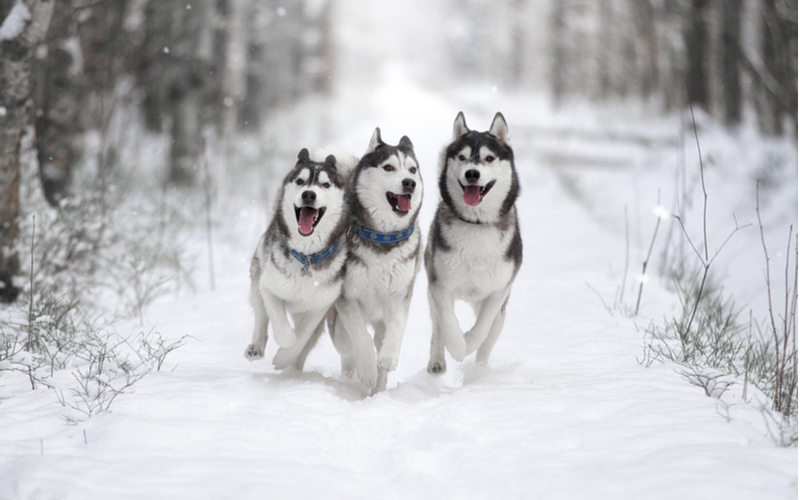 Compared to many other breeds, a Siberian Husky has a long lifespan, usually between 12-15 years.

During this time, Siberian Huskies usually stay healthy and fit as long as their diet is nutritious and they are well taken care of, along with adequate physical activity.

Pure White Husky – Everything You Need to Know

The Pure White Husky or the Isabella Husky is a popular but rare type of Siberian Husky dog breed. Pure White Huskies are known for their dashing looks, stamina, and strength.

A Pure White Husky is covered with a thick, white coat. Their coat also tends to be thicker than other Siberian Huskies. They have pointed ears and bright blue almond-shaped eyes.

Although the size for a pure white Husky may vary, they usually stand to weigh between 35 and 60 pounds. While they may be larger in size, they’re relatively lean due to their active lifestyle.

Moreover, the white Husky may resemble a wolf, but it is an absolute sweetheart. White Huskies are known to be affectionate and loving to their owners, children, and even other dogs.

White Huskies may also be relatively easier to train than other Husky dogs. But since Huskies are a smart and mischievous dog breed, it’s essential to stay patient and consistent when you’re giving them training sessions.

What Can I Expect When Caring for A Siberian Husky?

Although the Siberian Husky is a healthy dog, like all other dog breeds, it also suffers from some common health problems.

Although these conditions are minor and can be treated, you must keep an eye out for their symptoms and get treatment as soon as you suspect ill-health.

To keep your Husky dogs fit and healthy and to prevent it from developing health conditions, it is important to be mindful of their exercise needs, grooming routine, and nutrition requirements.

A nutritional diet for a Siberian Husky should contain a formula that would cater to its digestive needs through different phases of its life. Some dog food is also breed-specific and contains a formula that is suitable for puppies, adults, and senior dogs.

Moreover, the food for Husky puppies is different from that of adult Huskies. Therefore, ensure that you have the right food for the right age.

It’s essential to ensure a balanced diet. The quality and quantity of food your canine friend will ingest will have an impact on its overall health.

A Husky’s eating habits largely differ from other dogs. Unlike other breeds, Siberian Huskies are not greedy. In fact, their food intake is lesser due to them being long-time working dogs.

As a general rule, Husky puppies should be fed a day thrice. However, with time, as the Husky grows, he will eventually shift to two meals a day.

Since Siberian Huskies are an athletic breed, they require ample exercise and playtime during the day to release their energy. Otherwise, there is a chance of them becoming hyperactive.

Huskies are not the ideal breed for dog owners who want to spend their days lying on the couch. But if you’re an active owner who wants to run and take a long walk every day – a Husky is your go-to dog.

So, if you own a Husky, you will need to make sure it gets at least 80 minutes of exercise each day with most of that 80-minute spent with the Husky running. Moreover, along with being physically active, a Husky will need some mental exercise to keep it healthy and active.

It’s recommended to play some engaging games with them throughout the day to keep them busy and distracted from howling the living room down.

If you own a Husky puppy, know that they’re equally active as their adult mates. But 5 minutes of formal exercise every day for each month of their life should be sufficient to keep a Husky puppy healthy!

Some great exercises for Siberian Huskies include:

A Siberian Husky has a dense coat to protect it from cold weather. The good news? Huskies don’t need to be groomed that often as they are naturally clean dogs.

It’s perfectly fine to brush a Sibes gorgeous coat once a week. However, during shedding season, try to brush your Husky’s coat once every day.

Huskies also have strong nails that tend to grow fast; therefore, remember to trim their nails regularly with a nail clipper.

Moreover, clean your Husky’s ears every day to avoid the build-up of ear wax to prevent ear infections. Also, it’s equally important to brush your canine friend’s teeth every day!

A common query for first-time Husky owners is about the Husky’s bathing needs. Although they are clean animals, they need to be bathed with a suitable dog shampoo at least once every week, or if necessary (especially if your Husky gets plenty of time exploring the outdoors) twice a week.

Every dog, irrespective of its breed, deserves to be loved and cherished. But if you’re planning to welcome a Siberian Husky home – know that they’re precious dogs who will provide you with their affection and loyalty for life while all they in return is your love and attention!

We wish you the best of luck in finding yourself a Husky partner! Remember to adopt rather than purchase! You may be giving an adopted dog a chance at a life full of love and care that they may otherwise miss out on.

If you like reading about dog breeds, check out: Golden Retriever Dog Breed Information