Boston Terrier dogs (pronounced as baw-stuh n ter-ee-er) are intelligent and friendly dogs who are easily recognized by their tuxedo jacket coat. Their black and white coat and their well-groomed manners have earned them the title of the American Gentlemen. Boston Terrier puppies and dogs both have a gentle nature; they would love to walk along with you as much as they would enjoy a nice cuddling session on a sofa at home, which makes these American gentlemen the perfect choice for a pet dog.

Although the Boston Terriers have an aggressive look, this breed is not at all aggressive. Categorized as a non-sporting dog, Boston Terriers are native to America and date back to the late eighteenth century and were known as Bullet heads, Bull Terriers, or Roundheads. In 1989, they were given the name Boston Terriers.

These energetic, mid-sized dogs are a perfect choice for someone who wants a cheerful companion around. It would be good for you if you do not let their special and unique tuxedo look and formal outlook fool you because these American gentlemen can be as goofy as it gets.

About The American Hairless Terrier

These dogs were bred in the 1800s by crossing White English Terriers and Bulldogs. These are often called the national dogs of the United States because they truly are an American breed. Before Boston Terriers, this breed of dogs was called Boston bulls and American bulldogs, but the owners were forced to change the breed’s name

The owners of bull terriers and bulldogs objected to the aforementioned names, so in 1891 the breed was given the official name of Boston Terrier dog. In 1893, the AKC accepted them as a breed. They initially weighed more than 20 kg but were continuously bred smaller until they reached the size they are today.

These dogs have always been considered affectionate and amiable, but after the 1960s, their popularity went a little downhill as other breeds took over (hint: toy breed). However, they are getting back in the game; it is the 21st most popular dog breed in the United States.

These tuxedo-cost dogs are well-muscled and compact as well as strong. They were originally bred as fighting dogs, but now they are known as chivalrous house pets. Their head is square looking and in proportion to their body.

Right from when they are puppies, Boston Terriers have a well-defined stop, a short but broad and deep muzzle that looks in proportion with their slightly undershot or even bite.

Another prominent feature of Boston Terriers is their eyes; they have round, dark, and large eyes that are set apart. Their eyes are considered highly expressive, so much so that the breed standards state the ideal expression of these dogs is “kind and alert.”

Boston Terriers have small and pointy ears; their legs are muscular and straight, accompanied by an arched neck and a broad chest. Their tail is usually short, and it’s either screw-shaped or straight.

Boston Terrier size is small as they weigh anywhere from 12 to 25 pounds and are not that heavy. They are quite portable, and they are 15 to 17 inches tall mostly.

Boston Terriers are very well-mannered, intelligent, and alert. However, if they do not get the proper training, both mentally and physically, they can get quite high-strung and rambunctious.

They are keen learners, so they are easy to train. Their intelligence makes them quick learners; they are even sensitive to the tone of people’s voices.

However, you need to be careful because if they are not trained with a firm hand, they develop something called the Small dog syndrome. This behavior is usually human-induced, and your little canine friend starts thinking that he is the one calling shots. So, try not to let this develop in your Boston Terrier puppies.

These round-headed dogs are good with children and fond of the elderly. They do not shy away from strangers as well, which takes their friendliness bar to the top-notch. Boston Terriers like to be part of the family and show affection towards their human pack. They also are good around the pets who do not belong to the canine group.

Boston terriers come in a lot of varieties. Although the sub-types were made by crossing different breeds, one thing remains common: their intelligence.

While some of these are people pleasers and easy to train, some of them can be quite stubborn and naughty. But whatever type you may choose, their playful nature, loyalty, companionship, and great nature make them a great choice as a pet.

Here is a list of different Boston Terriers who vary in behavior and personalities:

The cute companions have a life expectancy of around 11 to 13 years usually.

Although these easygoing American gentlemen do not have a big fur coat, neither are they natural shedders still are not considered hypoallergenic. Reason?

Boston Terrier puppies often suffer from different allergies and end up with very itch skin. As a result, they rub and scratch a lot and hence shed hair that spreads dander. This can cause allergies in people and keeping Boston Terrier as a pet is not recommended to allergy-sensitive people.

What Can I Expect When Caring for A Boston Terrier?

Boston Terrier puppies are susceptible to some health issues, and it is better if you watch out for them. They require a certain amount of nutrition, training, exercise, and grooming to stay in the best health and shape. 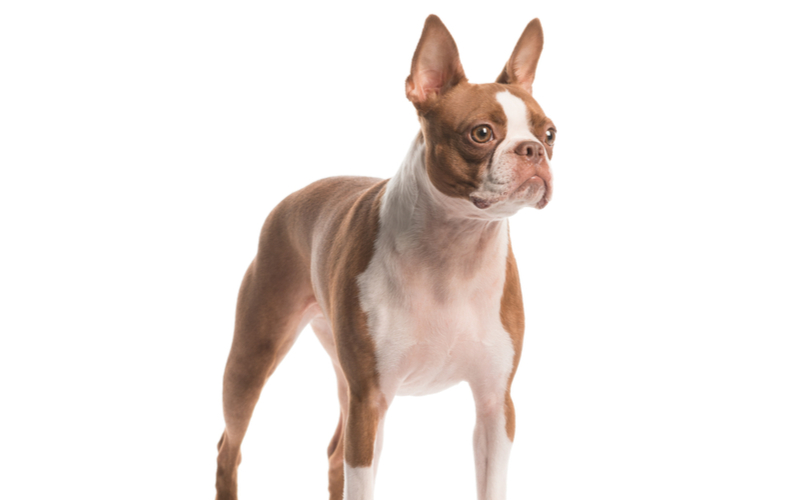 Like any breed of dogs, Boston Terriers are prone to some physical health issues. It is not like all Boston Terriers will have these diseases, but you should be aware of the risks if you are considering having one.

Some of the other problems these dogs can have been:

While buying a Boston Terrier, you should seek health certificates of:

You can check these clearances from the OFA website.

The coat of Boston Terriers is smooth and short; hence it is not a big problem to groom it. You should comb it with a bristle brush and occasionally bathe them.  Their face and eyes should be cleaned regularly with a damp cloth.

Their ears should be kept clean to not let the ticks fester. They need to get their nails trimmed from time to time on average twice a month is suitable for them. As these dogs do not shed a lot and don’t have a strong body odor, they are easy to care for. It is enough to brush their teeth twice a week to maintain their oral health.

Boston Terriers puppies and dogs are both naturally very energetic and playful, but they do not need rigorous or excessive physical exercise. So, some small in-house play sessions and a long walk daily are what are enough to keep them happy and in shape. They are, however, quite well-behaved when indoors and stay well in apartments or houses without a yard.

These American gentlemen may act a little picky when it comes to food. Some of them are prone to gastric problems as well because of having a sensitive digestive system. However, feeding them becomes easy once you figure out what works for them and what they like.

It is good to feed them twice a day, and some little treats in between the two main meals won’t cause a problem either. We suggest giving them 0.5 – 1.5 cups of good-quality dry dog food according to age, height, and health conditions.

These small dogs need to be trained from puppyhood to avoid any stubborn behavior from them. They need training at an early age and a human who shows them leadership qualities. Otherwise, it is common for them to think they are the ones who hold power and need to tell their human what to do.

If trained properly, they enjoy the training process. They should be taken on a walk with a harness and leash on and taught to come back when they are called. 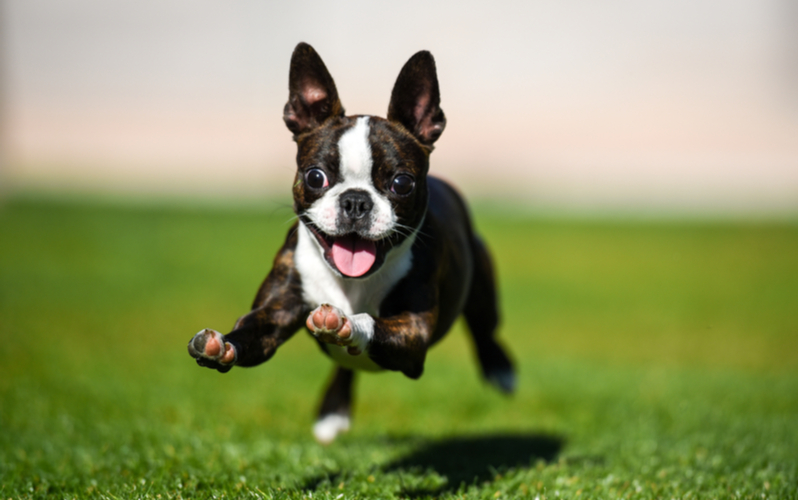 To sum it all up, Boston Terrier dogs are cute, well-behaved, energetic, and lively. They like living with kids and families. They do not have high grooming requirements, so they are well suited for people who have busy schedules or cannot spend much time with their pets.

These dogs are great companions and easygoing. Make sure to check the history of their parents while buying this canine friend as a pet.

If you love Terriers and want to read more about them, head over to American Hairless Terrier Dog Breed Information.

When Do Dogs Stop Growing

Are Cherries Safe for Dogs to Eat?